MarNostrum - Space for Dialogue and Diversity


Between Tradition and Modernity

The topics of the researches on this page are documented experiences that were not programmed, but have ensured a significant expansion of our knowledge:

- Gladys TCHUIMO, choreographer, interviews and stills to the dance performance ALOOPHO – a revisited myth. To examine the rituals in Africa and show another image and social status of women through their place in religion, that is the idea of this performance inspired by the legend of the great priestess Yoruba. – follow video interviews

- Omar NDOYE, Lebou from Yoff, psychoanalyst (IREP). Conference on the trance therapy of 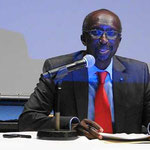 - Guest workers in Senegal: GRIOTS from Guinea as street musicians for their compatriots – follows video